The Origin of Durian

Origin of The Word "Durian"

What is a durian?

The name durian comes from the Malay word duri (which mean thorn). Add the suffix -an and you have a noun in Malay.

The word durian usually refers to the fruit but it can also mean the durian pulp or flesh (technically called arils) that we eat, and also to the tree.

The durian fruit has a thick fibrous husk, covered by sharp spines or thorns. The flesh or pulp is creamy, white, yellow or golden yellow which is strongly flavored and sharply aromatic. 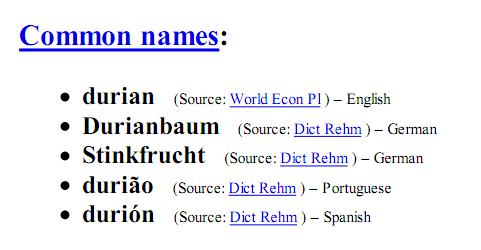 
Origin and Distribution of Durian

Where do durians come from?

The island of Borneo is generally accepted as the original geographic origin and center of diversity of the genus Durio.

It has been reported that Durio has about 27 recognized species.  The island of Borneo has 19 indigenous or native species of Durio while the island of Sumatra has 7 native species. Peninsular Malaysia has 11 species. Myanmar has 2 recognized species indigenous to the country. It was also hypothesized that a land bridge connected Palawan in the Philippines with Borneo during the pleistocene era with D. zibethinus L. found occurring naturally on Mindanao and the Sulu archipelago as well as Palawan.

Of the 27 recognized durian species only 6 species produce edible fruits. One of these is Durio zibethinus L. which is known as the common durian and is cultivated commercially in South East Asia.

This blog is all about this particular species of durian.

Durian is the "King of Fruits"

The Durian is a fruit of a perfectly unique character. There is no other fruit you can compare it with.

"as producing a food of the most exquisite flavour it is unsurpassed... I should certainly choose the Durian ..as the king of fruits".
Alfred Russel Wallace

The durian is the most famous and popular tropical fruit in Southeast Asia. Fondly regarded as the "King of Fruits", the durian is sought and savored with passion by millions of durian lovers in the south east Asian region. Its fame is spreading and there is a strong demand for quality durian in Hong Kong and mainland China. Durian fans can also be found in Taiwan, USA, Europe and Canada.

How The Common Durian Got Its Scientific Name

At the beginning of the 15th century, many famous European travelers called the durian with names such as "doriones", " durion", "duryaoen", "durean",  and "durioen". There was no accurate descriptions of the durian then. The durian was very often confused with another green thorny fruit known as the soursop (Annona muricata).

In 1741, a famous German botanist, G.E. Rumphius,  published his famous book called  "Herbarium Amboinense" which contains several pages devoted specifically to the plant which he called  'durioen' ( known nowadays as the common durian).

Rumphius' detailed descriptions of the durian had contributed significantly to our current knowledge of this unique tropical fruit. He was accredited with creating the genus "Durio".

He also managed to clear the confusion between the durian and the soursop which had been a source of inaccurate information about the durian since the beginning of the 15th century. It is interesting to note that the soursop is known in the local Malay language as "durian belanda" or "Dutch" durian.


Rumphius was also known as the “Indian Pliny,” and spent most of his life in the employ of the Dutch East India Company, stationed on the island of Ambon in eastern Indonesia. In his book, Rumphius described in great detail how the local Ambon hunters used the strong odour and exceedingly delicious taste of the durian to successfully bait civet cats. This very unique way of using durian to trap civet cats caught the attention of another great botanist who later made the connection of the civet cat to the durian.

While Rumphius was accredited with the creation of the genus Durio, it was Carl Linnaeus who affixed the Latin name zibethinus to it.

Carl Linnaeus, the great Swedish botanist, physician, and zoologist, who laid the foundations for the modern scheme of binomial nomenclature for plants, published his book called ‘Systema Vegetabilium’ in 1774.

Linnaeus affixed the Latin type species name zibethinus to the common durian thus creating "Durio zibethinus". This is a tribute to Rumphius' work on durian, particularly the story Rumphius wrote about how Ambon hunters used the durian to bait civet cats.

Zibethinus is derived from the Italian word  zibetto, which means "civet cat" and is also an old name for "skunk".

Thus, this popular tropical fruit gets its name from the civet cat's love affair with the fruit and NOT that it smells like a civet cat!


Thus, the botanical name for this common durian is known as
Durio zibethinus L.

It should be noted that  Linnaeus is the correct authority for Durio zibethinus and NOT J.A. Murray.

The earliest valid publication on the species is that listed on page 581 of the 13th edition of Linnaeus’s ‘Systema Vegetabilium’ published in 1774, and edited by J.A. Murray. This confirmed Linnaeus as the authority because he was the author of the book. Murray was just the editor.  The 14th edition of ‘Systema Vegetabilium’ of 1784 put the entry for Durio on page 698.