Low fruit production in a durian farm is a recurring major problem. This problem is generally associated with poor pollination and fruit set.

Durian pollen is released mainly in clumps, indicating that it is not distributed by wind. Moths may be involved in pollen transfer. It was shown that if more pollen lands on the stigmatic surface, a higher amount of fruit set will be the result. This knowledge has led to hand-crossed pollination being a common practice to improve fruit set in durian.

Semi-wild durian trees—particularly tall ones—may be dependent on flying foxes for enhancing reproductive success. The following study is the first to quantify the role of flying foxes in durian pollination, demonstrating that these giant fruit bats may have far more important ecological, evolutionary, and economic roles than previously thought. For full report, click on the link in the caption below.

There were various factors that cause a low percentage of fruit set, such as low pollen viability, pollination failure, fertilization failure, self-incompatibility, clonal incompatibility, low level of nutrients, insufficient water, damage to flowers and fruit due to pests and diseases, and adverse weather conditions during flowering and fruit development (Lim and Luders, 2009). There was no correlation between the number of cross-pollinated flowers and the percentage of fruit set (r = 0.12).

When about 25% of total flower number on the whole tree flowers is at bloom,hand-crossed pollination using pollen from different varieties or from the same variety but different trees is recommended. The optimum time should start pollination is from 6:30 to 9:30 p.m. or later, which is the effective pollination period for durian. (Reference)


For best results, do pollination 10 to 12 hours before the flowers fully opened or bloomed. 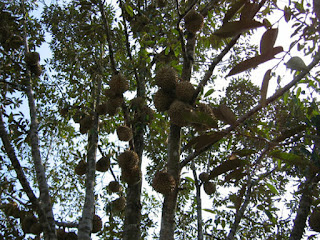 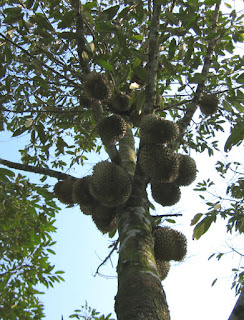 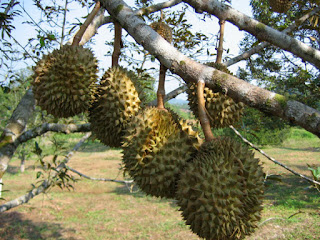 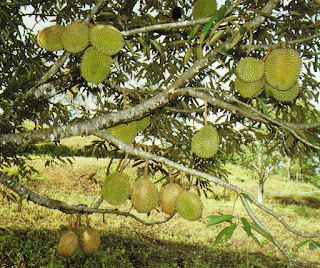 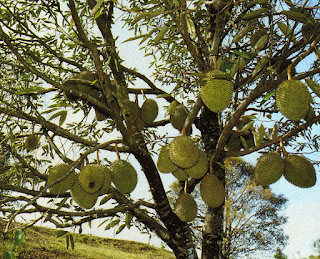 First published: Annals of Applied Biology , February 1998
Seasonal fluctuations in weather conditions were found to influence the flowering and fruiting phenology and reproductive biology of durian grown around Darwin. Manually assisted cross-pollination resulted in higher fruit set of 31% in contrast to < 10% by selfing, producing higher yields and better quality fruit. Self-pollination resulted in more fruit abortion and produced fruits that were mis-shapen, curved with lower numbers of arils/locule, arils/fruit and lower numbers of seeds which were usually shrunken and disfunctional. Evidence from these studies also confirmed that the self-incompatibility system in durian is gametophytically controlled and that cultivars could be totally self-incompatible, partially self-incompatible or totally compatible. The durian pollen was found to exert metaxenia effects that influenced the development of the fruit characteristics and also xenia effect on the seed.

It has been known for some time that some durian trees are self-incompatible (Coronel 1966); although crossing and selfing tests with named clones have been conducted (Jamil 1965), no details
seem to have been published. This is unfortunate as such information would be useful in determining good clonal mixtures for orchards and for the production of better clonal material in the future. The Malaysian clone D99 has been shown to be self-compatible (Zainal Abidin and Nik Masdek 1992). Clone D24 (Shaari et al. 1985), and the Thai cultivars Gumpun and Luang (Lim el al. 1992) have been demonstrated to be self-incompatible.

However, compatibility information for the many other clones/cultivars is not available.