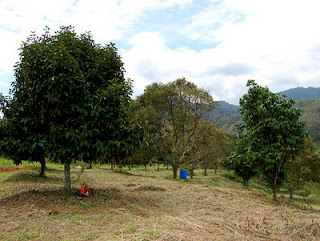 Soils:
Durian prefers deep, well-drained loamy soils not less than 1.5m deep. Soil pH about 5.0-6.5.  It grows very well on gently sloping land (slope 6-12°) and foothills. Durian does not perform well if elevation is higher than 600-900m above sea level. The durian cannot stand waterlogged conditions and is vulnerable to wind damage during storms and typhoons and requires protection.

Temperature:
Durian is native to the tropics, and needs an environment that is hot (24-32°C) and moist with 75-80% humidity. It will not grow when mean daily temperatures drop below 22°C.

Rainfall:
It requires an annual rainfall of 1500mm or more. Because the durian root system is very shallow (< 30cm), supplementary irrigation is very necessary for all stages of plant growth.

Dry Weather:
For matured trees, durian requires a dry spell of about 1 to 2 months for flowers to initiate and develop fully. Four weeks after the flowers bloomed, the tree must receive just enough water for proper fruit development. Too much water will cause the tree to bear new leaves at the expense of the fruits.

Young durian trees are very susceptible to drought and high mortality can be avoided with proper irrigation. Trees that received irrigation are more vigorous and will begin to bear fruits much earlier usually at 5-6 years.

For more information on growing durians, go to this link at www.durianhaven.com :

How To Grow Durians.

This article is taken from the Durian chapter (19 pages) from The Production of Economic Fruits in South-East Asia by Othman Yaacob and Suranant Subhadrabandhu (Oxford University Press, New York, 1995).


2. CLIMATE, AGRO-ECOLOGICAL ZONE AND SOILS
2.1 Climate and agroecological zones
Malaysia is characterised by a humid tropical climate with heavy rainfall (2540 mm p.a. and above), average daily temperatures of 21-32oC and humidity averaging about 85%. Due to small seasonal variation in incoming solar radiation, the annual difference in daylength is only 2 minutes along the equator and 49 minutes in northern regions, giving a daylength of 12.30 hours year round (Nieuwolt l982).

Similar rainfall conditions exist in Sabah which is moist and wet throughout the year especially towards the interior with the exception of the rainshadow areas between Tenom and Keningau, in Kagopon in the west coast and Semporna in the southeast and Tg. Malandong north of Davel Bay.

Rainfall is affected by the North - East (November - March) and South - West (June-August) monsoons which bring heavy rainfall. For the months April-May and September-October, less rain is experienced because of changes in monsoonal winds.

Based on 30 years of wet and dry season records (expressed as a percent of potential evapotranspiration in moist and/or wet months) and considering the physical constraints, soils and crop suitabilities, 12 agroclimatic zones of the Peninsula, Sabah and Sarawak have been mapped which include 15 of the major crops in the country (Anon. 1992).

Rubber and oil palm are the major agricultural enterprises over the country with the exception of the highlands and in areas where there are 4 consecutive dry months. The most suitable climate for mango and sugarcane is found in the northern section of Perlis, in Kudat, parts of Tenom, and Bahagian Pendalaman of Sabah, and in Sarawak.

Pineapple is grown in small areas in Ranau, Tawau, Kudat, north of Niah Suai Sibuti, and in Pontian, at the southern end of the Peninsula.

Banana is found in Jelebu, Tangkak and scattered along the coastal alluvium of the Peninsula. It is also found in Tawau, Sandakan, Patai Barat and Keningau in Sabah, Batu Kawa and is spreading in other areas of Sarawak.

Durian is suited to Niah Suai Sibuti and in the northwest of Bahagian Pertama.

Cocoa which needs partial shade and richer soils, is being integrated with coconut along the coastal alluvium in the Peninsula and is grown on the best volcanic soil in Tawau, Sandakan,Keningau, Ranau in Sabah, in Batu Kawa, Bintulu, Bahagian Keempat and Kelima in Sarawak.

Pepper, a major production in Sarawak is grown on sedentary soil, in Bahagian Tawau and Sandakan, Bahagian Pendalaman, Sipitang and Kota Belud in Sabah.

Coconut is largely found along the coastal plains on alluvial soils and is mainly grown by smallholders and big plantations near Teluk Intan.

Rice is cultivated at various places in Sabah, in Batu Kawa, Bintulu and Niah Suai Sibuti in Sarawak, whereas the double cropping of paddy occurs in Kedah and Kelantan.

2.2 Soils and topography
The topography of Peninsular Malaysia is characterized by the central mountain ranges running from north to south. The highest peak, Gunung Tahan, is 2,187 m a.s.l. In Sabah and Sarawak, a similar topogaraphy of high mountain ranges occurs in the interior, with all ranges below 1,800 m except Mt Kinabalu, which at 4,101 m a.s.l., is the highest peak in S.E. Asia. A number of large rivers such as Sungai Rajang, Sungai Baram in Sarawak and Sungai Kinabatangan in Sabah, originate from these mountainous areas.

The soils of Malaysia can be divided broadly into 2 groups:

(a) the sedentary soils formed in the interior on a wide range of rock types, and (b) the soils of the coastal alluvial plains (Nieuwolt et al. 1982).

The sedentary soils are developed on igneous, sedimentary and metamorphic rocks, and are strongly weathered with mostly kaolinitic clay minerals. The sedentary soils fall under the classification order of Nitosols, Acrisols, and Ferralsols (Ultisols, Oxisols). Nutrient deficiencies of Ca, Cu, Mg, Mo and Zn can depress the yield of legumes (Tham and Kerridge 1982).


The peat, acid sulphate and bris soils are problem soils, and are difficult to manage for both crop and pasture production, and in particular for legumes.

Soil Map of Malaysia (Source from The Soils Maps of Asia)