Durian is known locally in Vietnam as Sau Rieng.

In Vietnam, it is mainly cultivated in the South but there are some orchards in the highlands in Lam Dong province at elevation of about 600 to 1000 mm.

Few cultivars are available in Vietnam and their quality is still poor according to international standards. Commercial cultivars include ‘Sua Hat Lep’, ‘Hat Lep’, ‘Ri-6’ and ‘Kho Qua Xanh’. Cultivars from Thailand are now available in commercial nurseries. The following table shows durian cultivars in Vietnam, their characters and location of cultivation:

Table 9. Durian cultivars in Vietnam, their characters and location of cultivation


Propagation: In Vietnam, as well as in some other countries like Indonesia and the Philippines, it is a common practice to grow durian from seeds, which are not true-to-type, with a large amount of variation. In Thailand, only grafted plants are used.

Planting: Young durian plants develop slowly with weak roots. The young plants should be kept in the nursery for about one year before field planting. Spacing varies from 8 to 16m apart, with 10 x 10 m the most common spacing. At the closer spacing the orchard may need to be thinned after 8 to 10 years.

As young durian plants cannot tolerate strong winds and sunlight, they are normally planted together with other nurse trees, such as bananas in a mixed plantation. Planting should be done in the rainy season.

Pests and diseases: Durian trees do not have serious pests, except for a few insects such as peach moth (Conogethes punetferalis. However, durians are affected by a number of serious diseases, particularly root rot or patch canker (Phytopthora palmivora), especially in waterlogged soils. The first sign of the disease is the production of brownish red gum from the stem in the collar region. Later, the infection spreads to the vascular elements. Gumming and discoloration extend slowly around the trunk. Before the trunk is fully girdled, terminal shoots shed leaves and die back, and the roots are infected and decay. An IPM method and phosphonate are recommended to solve such problems.

Fruiting season: May to November (peak period June to July).

Harvesting and yield: Trees grown from seedlings take 7 to 8 years to start bearing fruits while those grown from grafts may take 5 to 6 years. The fruits usually take 4 months from flowering to maturity after which they drop to the ground. As the trees are tall and quite difficult to climb, many growers prefer to allow the fruits to drop after ripening. Having rather long and strong spines that protect the inside portion, the fallen fruit is rarely bruised. In Thailand and some orchards in Malaysia, where durian trees are grown from grafted plants the fruits are picked before they fall. Maturity is indicated by a hollow sound as the fruits are tapped on the spines of the fruit.
As many as 100 fruits or even more are produced on a healthy mature tree in a single season. The tree continues to bear for about 60 years or longer, provided it is disease free.

Post-harvest operations: Fermentation sets in as soon as fruits drop from the tree and Fruits spoil within a few days. Those picked before ripening can last more than a week. The fruits are considered ripe when they emit their characteristic odor. To open the fruit, a sharp, pointed knife is inserted through longitudinal marks, and segments are forced to split apart. Once open, the fruit should be eaten immediately, but the flesh, sealed in plastic container, can be kept in the refrigerator for a week or in the freezer for months without spoiling and without changing its flavor.

Problems: Main problems in Vietnam include the lack of good cultivars since most of the existing plants were grown from seeds and they are not uniform, thus the quality of the fruits is not standardized and normally quite poor. Poor quality grafted plants originating from unknown cultivars are a further problem. The fruits that drop from the tree when ripe also create a problem in marketing.

Prospects: A suitable climate favourable to durian trees and the high price willingly paid by the consumers, makes growing durian on a large scale in the South a good prospect even if mainly for domestic consumption. New cultivars should be developed and clonal propagation (by grafting) should be practiced. Many good cultivars have already been introduced from Thailand, and these should be emphasized for propagation. Sua Hat Lep and Ri-6 are outstanding cultivars that were recommended by SOFRI for more propagation. 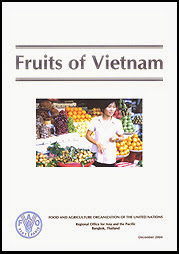 More information on durian growing in Vietnam in this blog -